Thank you, Aimai, Tom, and Yastreblyansky, for doing some amazing work here after I had to leave on very short notice. I really appreciate it.

Right now, I'm looking at yet another effort to try to prevent Donald Trump from being the Republican presidential nominee. This one has no famous names (no Romney, no Kristol) and apparently no million-dollar consultants, so it doesn't seem like either an ego trip or a scam:


Supporters of a growing anti-Donald Trump movement announced plans Sunday to raise money for staff and a possible legal defense fund as they asked new recruits to help spread the word with less than a month until the Republican National Convention.

Having started with just a few dozen delegates, organizers also said Sunday that they now count several hundred delegates and alternates as part of their campaign....

The group is led by delegates seeking to block Trump at the GOP convention next month in Cleveland by changing party rules so that they can vote however they want -- instead of in line with the results of state caucuses and primaries. It is quickly emerging as the most organized effort to stop Trump....

This comes at a time when Trump's poll numbers vs. Hillary Clinton are plummeting: 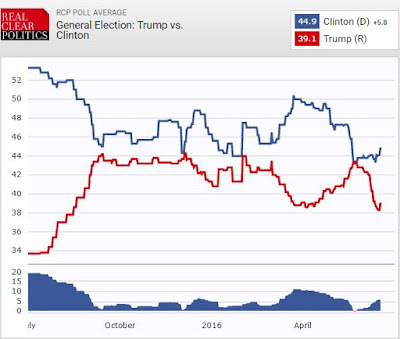 There are many complaints that Trump has squandered the opportunity to turn his sights on Hillary Clinton in the weeks since he became the presumptive nominee. But Trump thinks he's doing the right thing -- outraging people, spouting off like a Free Republic thread in human form, garnering free media. So he doesn't really have a campaign infrastructure and he hasn't raised much money? Hey, that worked for him in the primaries!

But that's the problem for Trump: He can't figure out how to beat Clinton, but he doesn't understand that because it was relatively easy for him to beat the GOP establishment. And the campaign and movement he's built are still very effective at defeating, or at least intimidating, the GOP establishment. Let's go back to that article about the Republican delegate revolt:


Some [anti-Trump delegates] reached out on the condition of anonymity, saying that spouses are fearful of physical threats if they speak out publicly about their plans....

A delegate from Colorado supporting the campaign ... spoke by email and on the condition of anonymity because he said he's already being harassed by other Republicans and is concerned for his safety.

I'm not endorsing intimidation tactics, but if they're the Trumpites' best weapon, I can't help noticing that they're still being used only against fellow Republicans. As we pivot to the general election, you might imagine that there'd be attempts to intimidate Democrats and independents into supporting Trump -- that's what a truly determined fascist movement would do -- but as far as I know, no non-Republicans are being scared into posting Trump yard signs and enthusiastically attending Trump rallies. It seems as if Trumpite Republicans are just turning their rage on their own kind. The Judean People's Front hates the People's Front of Judea -- oh yeah, and the Romans, I guess.

I still think we shouldn't be complacent about Trump, given the fact that the public isn't wild about Hillary Clinton, either. But some of the excessive intramural anger I'm seeing on the Democratic side is surfacing again over in the GOP. I don't think that will dissipate until the convention is over -- if then.

And no, I don't think the #NeverTrumpers will beat Trump at the convention. They still don't have a candidate. The person who probably has the most anti-Trump delegates is the widely loathed Ted Cruz. Trump's going to win at the convention, I think, because there still isn't anyone else who can put together a winning campaign.